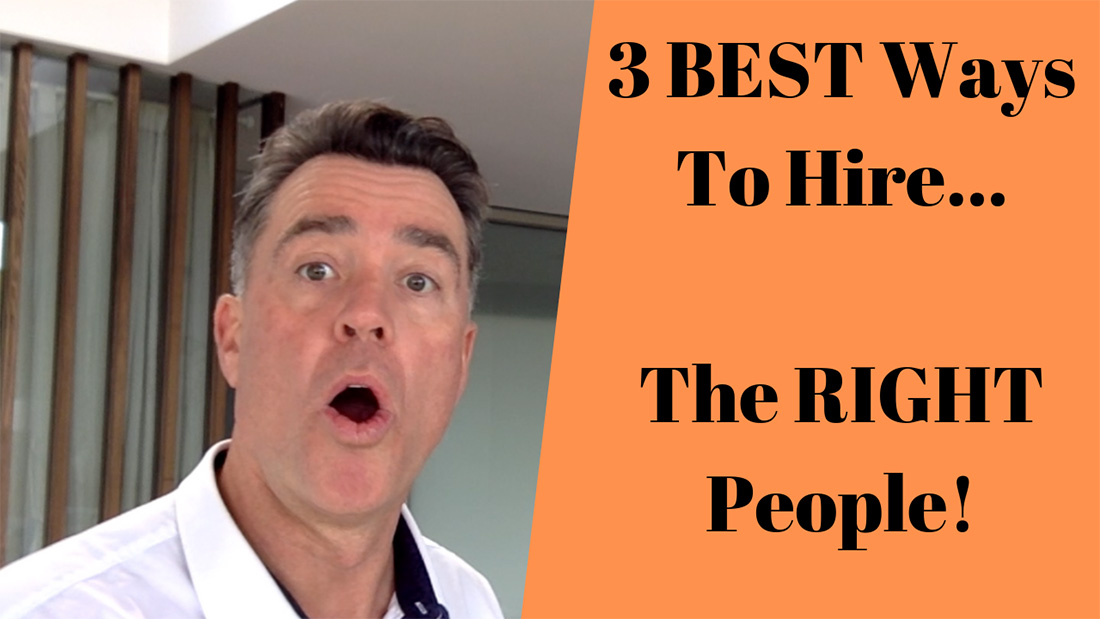 The best team always wins… in sport AND in business.

And to have the best team, you need to hire the right people.

The right people on a team will find the best strategy, overcome obstacles, be self policing and, as long as the team knows the direction to go in, will do whatever it takes to get there.

So today we’re going to look at the top 3 things to keep in mind when you’re hiring, so you hire the right person for the role, and you build a winning team that will get the job done in the best way possible.

The first thing to look for is attitude.

The best teams always win and a big part of that is attitude.

So hire on attitude and train for skills.

So many companies tell us there’s a lack of talent out there. That there aren’t many good people around.

But they’re looking at it from the wrong angle.

They’re trying to find someone they can slot into a role who can hit the ground running with next to no training or induction into the role, and who will get on great with all their team mates.

It’s great if you can find someone like that, but our experience is that those people are hard to find. That type of person usually doesn’t move from their current role at their current company.

Sometimes a great candidate for a role you need filled has a genuine reason they want to move from their current company. But in many cases, they may not quite be who you think and hope they are, so if you hire them, their flaws soon become apparent. It becomes clear why their previous company was happy to let them go.

A better strategy is to hire on attitude and train for skills.

If you find someone who has a great attitude and can be trained into the role, then when you hire them, you’ll most likely find they’re more loyal, get on better with their team mates and are overall a better team member than someone who has the skills already, but doesn’t have the same attitude.

When hiring, if possible, don’t take the candidates word for how good they are, get them to show you.

In other words, give them some tasks or tests to do, that relate to the job they’re applying for, and see how they perform.

When you do this, you’ll get first hand experience of what the candidate is like on the job.

If you hire for attitude and then train for skills, your new team member will be more loyal and work harder, because they’ll be thankful for the job. So if someone has a great attitude, see if they can be trained into the position.

Hire on attitude and train for skills.

The second thing is to put people into the right role.

So for fast moving roles hire-

Then for less dynamic roles in your company hire-

A common problem in business is that a lot of managers and business people hire down. What this means is they hire people who aren’t as good as them, in a given role.

Sometimes they do this because they think that hiring someone who is less skilled than them is the best they can get.

Sometimes they hire people less skilled because they don’t want their new hires to make them look bad.

And on it goes down the line.

When this happens, the company ends up full of low skilled people, which either dramatically negatively affects it, or even puts it out of business.

On the other hand, if everyone aims to hire someone better than them every time they hire, the company will build the strongest team it can.

This could make the company the leader in its industry or category and in the process, make everyone a lot of money, particularly when share options are part of employee packages.

When mangers and executives hire people who are better than them in a given role, it’s smart business strategy.

If you think of it this way…

They may be only average at each task their troops do, but the one thing the general is good at is mobilizing his troops.

He’ll be better at managing, strategizing, policy setting and overall making sure they win the war.

The third thing is that culture beats strategy every time

What this means is if you have a great team with a great culture, they’ll find the best strategy, to get the job done.

But if you have a great strategy and your team’s culture isn’t right, your team will be less effective and may even implode if the issues get serious enough.

A team with a great culture will weed out the problem people, whether they’re asked to leave or they’ll leave on their own.

So hire people who are self motivated, and work on building a great team culture.

Give your team members great training often, and make sure they know the company vision, and what their role is within that, and you’ll have a winning team!

A good way to find great people is to use Connectzapp.

When you enter the details of the role you need filled, you’re given a list of candidates ranked in order with the best match for the role at the top.

You can then swipe through each candidate, choose the ones you’re most interested in, put them into a shortlist, then contact those candidates direct.

You can get Connectzapp on the App Store or Google Play or go to Connectzapp.com

So give it a try.

Don’t forget to give this a clap.

There are great people out there… so get ‘em!