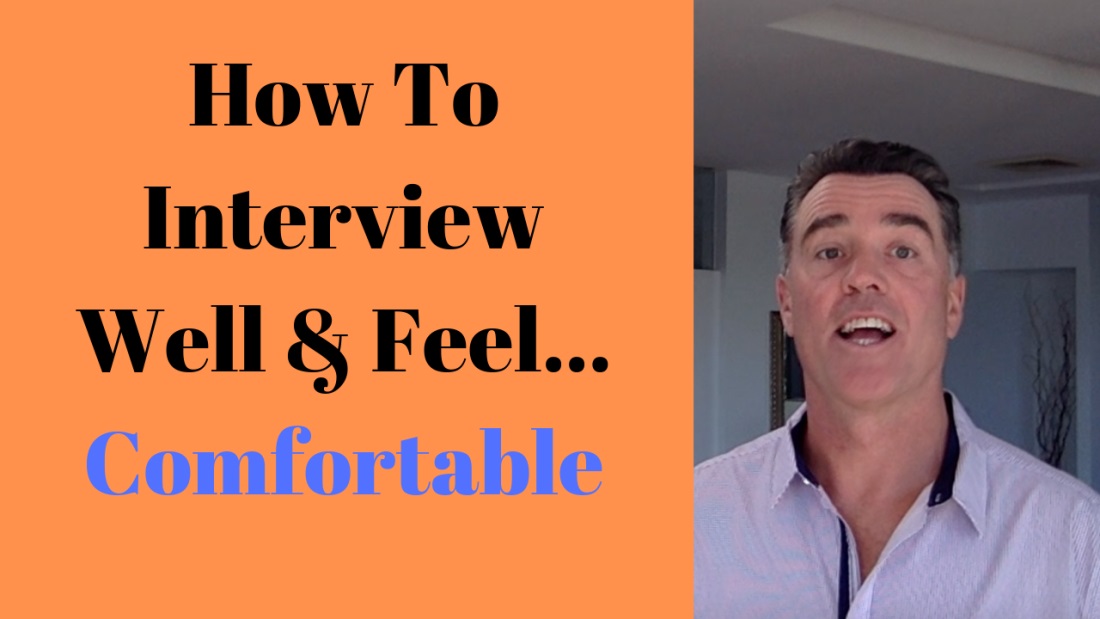 11 Jul How To Interview Well and Feel Comfortable

A lot of people get nervous in interviews.

Sometimes they sabotage themselves because of their nerves and as a result, they don’t get offered the job.

Being nervous in an interview is very common, and if YOU get nervous in interviews, then here’s how to be confident so you don’t sabotage yourself, and you nail ANY interview you’re in.

The reason people get nervous in an interview is because they’re giving the power to the interviewer.

In other words, they think the power in the interview is all with the hiring manager and not them.

This couldn’t be further from the truth.

Having been an employee and an employer, I’ve been on both sides of the interview many times in the past.

We constantly receive feedback from job seekers about their frustrations in finding the right job.

And we constantly hear from employers about their frustrations in finding the right person for a role they need filled.

Some of the frustrations from employers we constantly hear are-

The reason I’ve given you a glimpse into an employers perspective when it comes to hiring is to show you that, as the person being interviewed, you have as much power in the interview as the employer.

The easiest and best way to be relaxed in an interview and interview at your best is to consider yourself like a contractor.

If you hire a plumber to fix a plumbing problem, they tell you how much they expect to be paid, then turn up to your house and do the job.

They’re not nervous about telling you how much they charge, or what their skills and experience are, or how they’re going to do the job.

They just get on with it. It’s all very matter of fact.

If you take this attitude to your job hunting and when you’re in an interview, hiring managers will pick up on your matter of fact confidence and it will be attractive to them.

Consider it this way, you’re a hired gun with a certain set of skills, qualifications and experience and you charge a certain amount.

As long as your skills, qualifications and experience and the rate you charge are what the market demands, then there’s no need to be nervous in an interview, because you’re a hired gun offering your services to the highest bidder.

When you’re in an interview, think like a contractor.

It’s your job to educate the hiring manager on why you can do the job and how you’re going to do it.

When you do this in a relaxed and matter of fact way, you’re already miles ahead of the other nervous candidates who the hiring manager has to interview, but may vey well not consider because they don’t project the same confidence as you.

This will mean that, just by being relaxed and confident in the interview, you automatically move up the ranks of preferred candidates for the role. Maybe it’ll take you to the top!

You still need to do your homework on the role you’re interviewing for before you sit down for the interview.
You should always do that.

I’ve done loads of videos on how to answer specific questions and how to get the hiring manager to choose you as the best candidate for the role so you get offered the job.

So, if there are specific things you feel you need help with, go to you go to connectzapp.com and take a look. They’re all free for you to watch at any time.

And remember, the easiest way to blitz an interview is when the employer knows you’re a great candidate for the job.
The way to do that is to use Connectzapp to find your next job.

When you enter the details of the job you’re after, you’re given a list of the best jobs based on what you’ve entered, ranked with the closest matched job at the top.

You can then swipe through each job, put the ones you’re most interested in into a shortlist and then contact those employers direct.

The employers you contact can see you’re a great candidate for the job so they WANT to talk to you.

So get connectzapp on the App Store or Google Play or go toConnectzapp.com and give yourself the biggest advantage you can to find your next job.

If you’ve found this helpful, give it a clap.

And lastly, good luck with your job hunting!