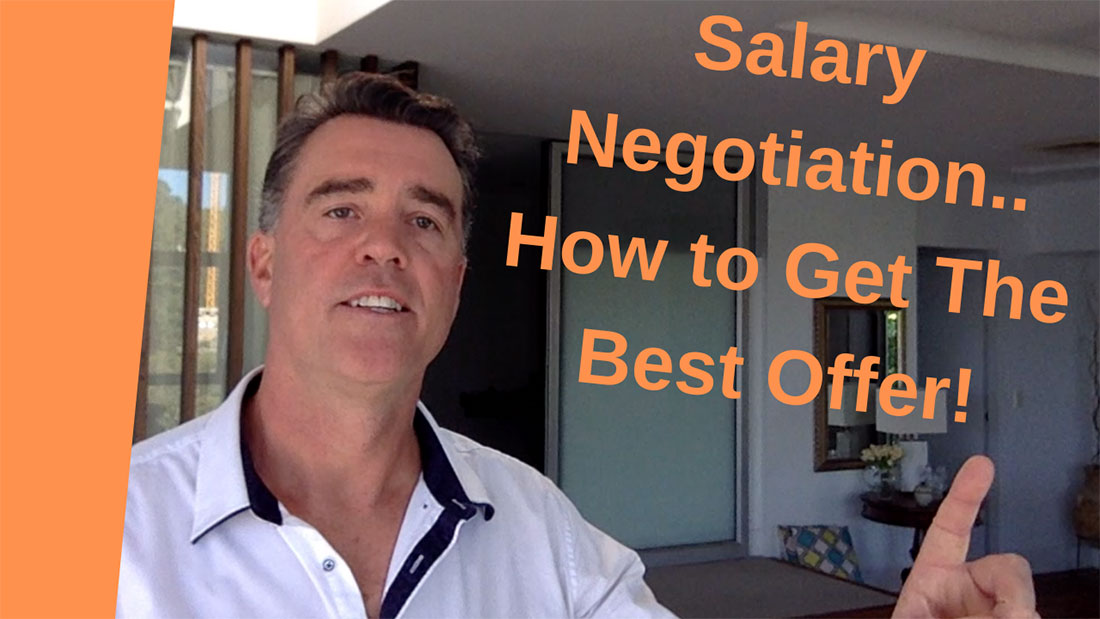 27 May Salary Negotiation – How To get a better Offer

Negotiation is a skill that takes practice, however even if you’ve never done any negotiating in the past, if you keep the strategies in this article in mind, you’ll negotiate the best salary package possible so you get the job you want on the highest salary you can expect from the role.

So let’s get started…

The first thing to keep in mind is…

Every role has a market value.

The market value of a role will be between a salary range of between x and y depending on what it is, and any company that has a role you’re applying for will know what this range is and be thinking of paying the successful applicant somewhere within that market value range.

For example, if you’re applying for a mid level role, you’re not going to be offered a CEO equivalent salary. It’s just not going to happen.

So having said that, your goal is to negotiate your salary to the higher end of the range.

If you don’t know what you can reasonably expect to be paid in the role you’re applying for then you need to research what the realistic salary range is for the role and for your level of experience.

When you do your research, don’t rely on any one source. Have a look at different sources to get the most likely range so you have a clear picture of what the likely salary range is.

Once you know what the likely salary range is, it’s then a process of negotiating to the higher end of that range.

There are 2 ways to do this…

The first is to put your foot forward first and tell the employer what you’re thinking in regards to salary.

The second is let the employer tell YOU what THEY’RE thinking.

There are pros and cons with both of these.

For example, if you tell the employer what you’re thinking by stating one figure, not a range, you could lift their thinking to a higher salary range and it could work out well for you,

but on the other hand you could mention a figure that’s way too high and potentially price yourself out of the role for that employer and not be offered the role.

If you let the employer tell you what they’re thinking and they mention a figure that’s a lot lower that what you were thinking, the negotiation will start at the lower figure, which is not ideal.

It’s possible to have the best of both worlds though.

Whether you choose to give the employer your figure first or you wait for the employer to offer you theirs, you can have the best of both worlds.

Here’s how to do it…

When you decide on the salary figure you’d be most happy with and you’re comfortable it’s within the range but at the higher end for the role you’re applying for and you’ve taken into account your experience, then the way to convey your figure to the employer is to tell them that similar roles with other employers are offering the figure you’re after.

What you’re doing when you do this is you’re setting the bar at the figure you’re after and at the same time adding some competition in your favor into the negotiation.

By putting it this way it’s also non confrontational because it’s not necessarily you asking for that particular salary, it’s other companies offering it.

If the employer is interested in you, they will respond positively to this.

You’ll now be negotiating from a position of strength.

Now it will simply be a case of being sensible about what you can realistically expect the employer to pay.

One of the rules of negotiation is that the most motivated party in any negotiation loses.

What this means is the party that wants or needs the deal the most tends to be the one that bends the most to the other party’s figure.

So with that in mind you can negotiate to the extent you’re comfortable with.

While you’re doing this, a good strategy is to remind the employer how qualified you are for the role by talking about your skills and experience. This will help reinforce with the employer why you’re worth the figure you’re asking for.

The other thing to keep in mind when you’re negotiating is to stay calm, respectful.

Remember, you’re probably going to be working for this employer so you need to keep the relationship a good one.

This doesn’t mean you should be a pushover negotiating your salary, but it does mean staying calm and friendly while the negotiations are taking place.

If the employer has a figure in mind for the role and they won’t move from it, then be ready to try to negotiate some of the perks of the role.

By negotiating your salary or at the very least attempting to do it and the whole time remaining calm and respectful, you’ll impress the hiring manager.

If you found this video helpful please like it and for more videos on how to secure the best job at the best salary hit subscribe. We produce new videos every week to give you all the tools you need to get the best job possible.

Of course, in any negotiation it’s best to be negotiating from a position of strength and the best way to do that is to have the employer know you’re a great candidate for the role and already be interested in employing you.

The way to do that is to use Connectzapp to find your next job. You can get it on the App Store or Google Play or go to Connectzapp.com

As always, Good luck with your job hunting!